Today marks the first death anniversary of Aslam Azhar, a progressive Pakisani best known as the father of television in Pakistan. Aslam Azhar is a living legend and a role model for all of us. Throughout his professional life, he contributed tremendously in the field of electronic media and show business in Pakistan. He was also one of the first radio broadcasters in Pakistan to read the English news.

Aslam was born in Model Town in Lahore in September 1932 in a literary family. His father was a civil servant and his mother was a mathematics teacher. Aslam was interested in Physics as a subject and attained his Bachelors’ degree from the Government College Lahore in Physics and Mathematics. After his graduation, he went to Cambridge to study law believing that jurisprudence is the way to understand one’s society and culture. He once said, talking to Pakistani media, that he believed it was jurisprudence that formed his ‘soch’ (thinking). 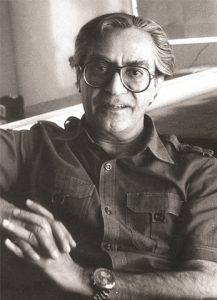 Aslam never forgot people who contributed in making him what he was. In one of his interviews to the Pakistan Television he recalled his class teacher, Mr. Ghulam Nabi Butt, who he believed transformed him from a boy to a human, and taught him the values he lived by all his life.

Aslam Azhar had a staunch character to the values instilled in him by his school teacher, Ghulam Nabi Butt and once understood the meaning of what it is to be Human, he enjoyed nurturing others around him. He lived his entire life accordingly and never let greed corrupt his values.

After his graduation, Aslam joined the Burma Oil Company. In just a couple of years he realised he was not created to do this job. Based in Chittagong he once quoted, ‘Parhain Farsi aur bechain tel?’, (study Persian and sell oil?). This was the moment he realised this job was not meant for him. He resigned on the same day and came back to West Pakistan and became involved in theatre and the performing arts, which had always been one of his passions. He started working as a free-lance radio broadcaster, documentary film-maker and as a performer and director in theatre, including street theatre.

Aslam had immense feeling for the poor and hardworking people of the country. He recalled a play that was performed in Karachi’s industrial area for factory and daily wage workers. The play was about the exploitation suffered by workers at the hands of the capitalist class. According to Arieb Azhar, his son, Aslam was inspired and stimulated by the hard-working labourers of Pakistan.

It was in the theatre group he met Nasreen Jan, the love of his life. They decided to get married. Talking about her husband to a Pakistani news agency Dawn News, Nasreen Azhar said, “I spent 51 years with him. We were husband and wife, but the stronger bond between us was of being good friends.”

In 1964, while Aslam was in Karachi, a friend approached and informed him that the Pakistani government wants him to lead in setting up a television station in Lahore. He made a team of three people who had some experience of working for radio and moved to Lahore. He had a knack for training and building capacities and bringing out the best from people who worked with him, which he proved by setting up television stations in other cities of Pakistan after Lahore.

Although he was the founder of television in Pakistan, but in his later years he preferred reading books to watching television. Aslam was a critical thinker and believed that ‘Critical thinking is the most important skill a person could ever have’. He said reading books stimulated the imagination and activated the mind, unlike television which encouraged only passive viewing. It was this facility for imagination and critical thinking that made him what he was, a progressive Pakistani. Although he is no more with us, but his teachings and his vision for a vibrant media and a Pakistani nation that has the capacity for rational thought remains with us as his legacy. May we succeed to strive together to make the electronic media like he wanted to see.

May his soul rest in peace!

The author would like to thank Nasreen Azhar and Arieb Azhar for reviewing the post and sharing Aslam Azhar’s portrait photo from their collections. The views expressed by the author do not necessarily reflect the views and policies of Lok Foundation.